This week we have an exciting update for fans of the franchise, with a special interview with the longstanding series artist, Igusa Matsuyama!

Matsuyama-sensei is the incredibly talented artist who has been creating your favourite characters (including a certain someone!) for more than two decades for the STORY OF SEASONS franchise, which is known as Bokujo Monogatari in Japan.

If you haven’t already, why not take inspiration from Matsuyama-sensei and enter our Fan Art Contest? There is still time to win yourself a HyperX ChargePlay Clutch™ Charging Case for Nintendo Switch!

What did you look forward to most when revisiting the characters for Mineral Town?

Up until now, most of the designs used for the residents of Mineral Town were repurposed from “Bokujo Monogatari 2.” For that reason, I’ve had a long-standing desire to re-design the characters to match their settings more appropriately. Those who are accustomed to the original designs may feel that something is a little bit off. But for this project, the producer and I both wanted to share the essence of the older games with new players who have never played the original. With that in mind, we went for the idea of  “nostalgic but new”.

Which character from Mineral Town do you have the strongest attachment to?

As mentioned above, unless they are a completely new character, the designs are remakes of the original. Because of this, I feel that every character has a special place in my heart. I guess that if I had to choose, it would be the male/female protagonists from the original game. I’ve had to spend a lot of time drawing them, so I have a deep connection with them.

STORY OF SEASONS: Friends of Mineral Town adds alpacas and Angora rabbits to the animals you can raise. We’re particularly big fans of the alpaca at Marvelous Europe! What animals would you love to draw that we haven’t seen in the franchise yet?

I would love to draw sea lions and fur seals. Don’t you think it would be fun to see alternate horse designs with unicorns or a Pegasus? I love drawing all animals; I would even happily draw a dinosaur if it’s requested! ♪

What tools (eg. paint, ink, graphics tablet) do you like to use to create your artwork?

Up until “Bokujo Monogatari 3” I would often use colour ink or Copic markers, but lately, most of my work has been digital.  I use a PC with a pen and tablet, for the most part. However, when I’m working on design ideas, I like to use paper and pencil or an iPad.

When designing characters, what kind of information are you given about them before you begin?

I create my designs according to the character backgrounds that are provided by the producer or the scriptwriter. These are internal characteristics like the character’s age, gender, occupation, upbringing, and hobbies. This type of information is something that I always receive. Depending on the character, sometimes appearance characteristics such as height, clothing, hairstyle, and facial features can be specified as well. I will often make design suggestions that do not deviate too far from the backgrounds that I am given. There are times when my proposals pass, but there are also times when they are rejected. The final decisions are made by the producer.

Your very cute dog, Kombu, inspires a lot of great cartoons on your blog. What other things inspire you when you create your illustrations?

Thank you for looking at my blog.

My dog, Kombu, has been with me for 14 years now and is currently the most important thing in my life. I can honestly say that my mind is filled with nothing but Kombu. When I’m drawing without thinking about anything in particular, I always end up drawing Kombu… It’s a little embarrassing. But with that being said, I am also happiest when I am drawing my dog. Other than that, I enjoy watching movies and foreign dramas, so it’s common that I find inspiration within those things.

We have seen your style change and evolve with each entry of the series. What style do you most enjoy drawing at the moment?

I think it was when I was assigned “Bokujou Monogatari 3,” I had a discussion with the producer about the direction of the designs. I was told that each instalment of the series was not a sequel to the last, but instead an independent work.  In that case, wouldn’t it be best to change the character’s profile along with the atmosphere for a fresher feel?  That’s what we had decided on, and I still keep this in mind when I’m creating different styles.

Nowadays, there are so many artists drawing at a professional level. To be giving advice to such people is truly an honour.

When I was a child, I would use pencils and crayon, and even a nail to draw in dirt. I also loved using clay. Even though it can be inconvenient, especially when compared to digital forms of art, I believe that using various art materials can be fun.

Thank you so much for all of the “Bokujo Monogatari” fan art! ♪  Occasionally I’ll take the time to browse fanart online too. I will continue to do my best to design characters that everyone will want to draw!

Thank you, Matsuyama-sensei, for taking the time to talk to Mineral Town’s newest residents! 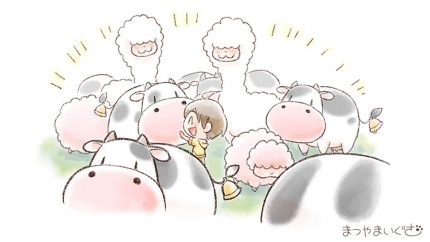 Get the latest Town Noticeboard updates to your email!